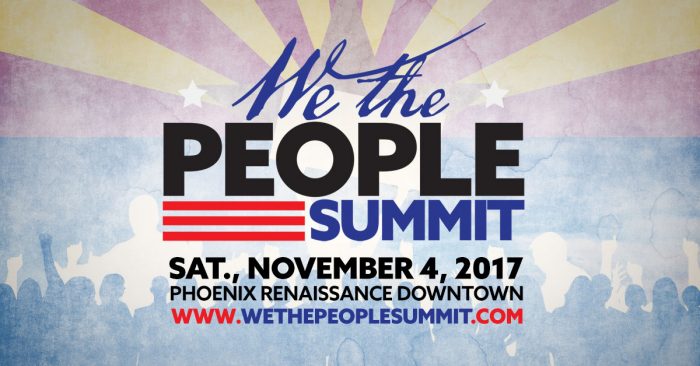 We the People Summit Announces Keynote Speaker and Title Sponsor

The We the People Summit is pleased to announce Maricopa County Recorder Adrian Fontes will be the keynote speaker for the upcoming second Summit, taking place on November 4, 2017 at the Renaissance Phoenix Downtown. Mr. Fontes was born and raised on the border in Nogales. His active duty service in the US Marine Corps solidified his love of country and made him a strong advocate of the US Constitution. After law school, Mr. Fontes worked for the Denver DA’s Office prior to returning to Arizona to continue his prosecuting career with the Maricopa County Attorney. He was elected in 2016.

The We the People Summit is a series of three summits designed to bring together individuals, grassroots organizations, and established nonprofits to empower, educate, and connect residents of Arizona who seek progressive change in local and state government. The second Summit will focus on calls to action with hands-on tools and techniques for advancing a cause. Participants will be connected with local activists so that together they may take the next steps towards solving problems within their communities. One of the goals of the second Summit is to highlight the interconnection of issues our communities are facing. We will include multiple perspectives as we delve into our discussions and this work. For example, we have an obligation to look at how factors like race, social class, geographic location and gender influence an individual’s ability to access health care. We are striving to achieve and share an inclusive, intersectional perspective.

Tickets to the second Summit are available www.wethepeoplesummit.com through November 1st. The summit is also accepting scholarship donations should you or your organization wish to support another attendee.

Together, we can change Arizona.