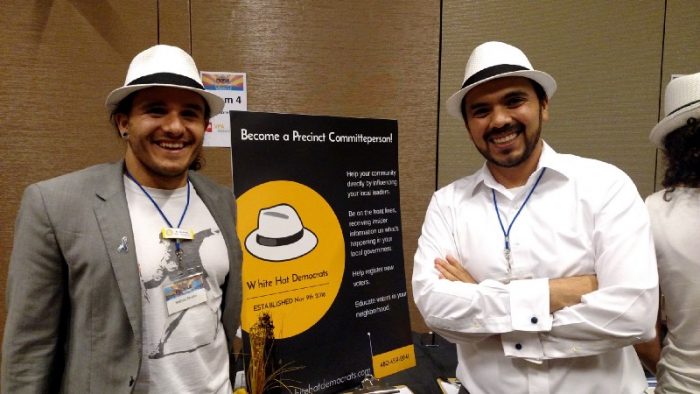 Among the crowds of over 1,500 attendees at the first official We the People Summit, the iconic brims of the White Hat Democrats were bustling around connecting people with opportunities in the Arizona Democratic Party.

“Our mission is to make sure that every single precinct in Arizona is represented by the communities that live in them,” said Damian Preciado, founder of the White Hat Democrats.

The White Hat Democrats was founded on the fateful day of November 9th, 2016 and currently consists of eight core members.

Since November, the group has signed up 138 people to be precinct committeepersons or the equivalent of over one PC every two days.

However, there are still an estimated 5,200 PC spots open in Arizona.

PC positions are the most local layer of party participation whose main duties are attending a monthly Legislative District meeting, promoting the registration of Democratic voters and assisting those voters during elections.

Here at the Phoenix Convention Center, Field Liaison Nathan Brodie said the White Hat Democrats are signing people up for our email list, get presentations so that their community members and other people that are a part of organizations can understand what it means to be a PC and to actually be PCs.

With that laundry-list of options, Brodie said “We have everything that we need,” and that “We’re mobile, we can go out to communities anywhere, so it’s wonderful to network with so many people in Phoenix.”

Beyond the election or appointment of PC’s, the group also focuses on training and directing PC’s.

The group works in partnership with other organizations and seeks to engage with the Native American community in Navajo County and connect with southern counties in order to broaden the Party reach into minority and bilingual communities.

So, why the white hats you may ask?

Brodie said he thinks it is open to interpretation but that “I’m a hip-hop head so I love when things rhyme together so mine is ‘The White Hat Democrats.’ One day I would really like to have my own remix or make a song like that. It also goes back to film.”

For Preciado it is an inter-generational symbol of good both in reference to white hat hackers and the white hats worn by the heroes in Western movies.

After contacting around 70 people today, the White Hat Democrats will continue to recruit to close the gap between Republican PC’s and Democratic PC’s.

Preciado sees building this ground game as critical for the success of Democrats in future elections and engaging more people at the polls.

“I can’t stress enough that it is important for young people to step up and make their voice heard,” Preciado said, “It’s easy to take things for granted, but many of the privileges that we enjoy were hard-fought and we’re losing them. So, we can watch them dissipate or we can take the opportunity to defend the things that have been good for us.”